An Indonesian woman has made news after she was publicly caned in Indonesia’s Aceh province for having sex outside her marriage.

According to reports, the act is a crime punishable under strict local Islamic law.  She was whipped along with seven others outside a mosque in the provincial capital Banda Aceh.

Many gathered outside the mosque to watch the offenders as they received their punishment respectively.

A masked sharia officer known as an ‘algojo’ was seen whipping the offenders five to 45 lashes on their backs. 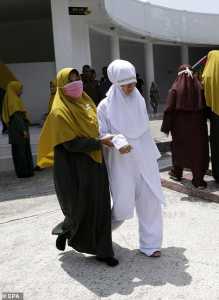