Singer Davido has revealed that his fiancee, Chioma, tested positive to coronavirus.

Since he made this known, several people have taken to his page to pray for him and his family while others dragged.

Davido had via his Instagram handle revealed his wife tested positive having just returned from London but he and his son including all 31 associates who traveled with him, tested negative.

Reacting to the news, Olunloyo stated that she had warned the popular Nigerian singer some days ago about his trip to the US, as the country had recorded lots of death cases from the deadly virus.

She wrote, “I warned Davido and Chioma 11 days ago. People don’t listen to me calling me a mad insane woman. Pls listen to me when I tell you something. It’s because I care 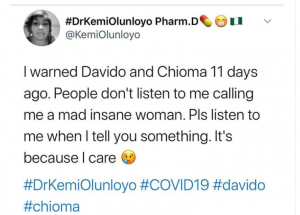