Nollywood actor Adeniyi Johnson turned a year older on February 27th and had a surprise party thrown for him.

The party was attended by celebrities, including Mercy Aigbe, Toke Makinwa, amongst others.

Read Also: I Thought They Were Robbers: Adeniyi Johnson Cries Out Over Birthday Surprise From Wife During Midnight Prayer (Video)

Adeniyi was formerly married to actress Toyin Abraham for close to three years. The couple pathed ways over claims of infidelity on the part of Niyi.

They have both moved on as Adeniyi is now with actress Seyi Edun, while Toyin is now with actor Kolawole Ajeyemi with whom she welcomed a son a few months ago.

See photos from the party below; 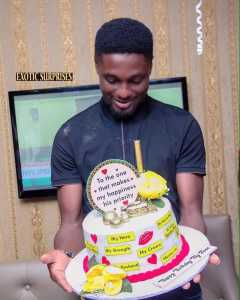