Making the announcement, she stated that she is proud of her nomination because she grew up watching the popular animation channel.

The singer is currently promoting her new song ‘billionaire’ which has started enjoying airplay since she dropped it.

I grew up watching Nickelodeon @nickelodeon_africa !!!! See who has been nominated at the Nickelodeon 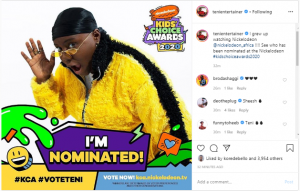