Nollywood actress Susan Peters has taken to social media to share a message that has gotten many talking.

According to the mom of one, women should be allowed to marry two husbands.

Peters went on to say this should be allowed so the woman will have one husband left should one die. She captioned her post;

”Will life be better ? Asking for a friend ooo😄😄😄” 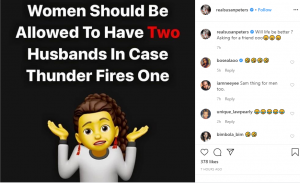 Peters was formerly married to a Dutch Dr Croon. They tied the knot in 2015 but the marriage has since come to an end.