Burna had tweeted saying he is ready to be challenged to a social media song battle with a worthy challenger and Reekaod had responded.

Not long after Reekado replied, Burna slammed the singer saying he asked for a worthy challenger.

Read Also: Burna Boy Reveals The Only Artiste That Has Helped Him Write Song

This did not go down well with many who immediately called the singer out.

One of those who felt Burna was disrespectful is music critic Joey Akan.

”Burna Boy was cruel to Reekado Banks. It isn’t bants or or anything that can be excused. It’s just plain old disrespectful to say what he did say. He could have chosen to say nothing, or found a better way. But that disrespect cut too deep. His god complex is on a roll.

Pound for pound, Reekado Banks is a super creative. He’s lowkey driven a lot of the hits from this country, writing records and cooking songs for many of his contemporaries. If Reeky brings out his credits in this game, a lot of your faves will hide in shame. Man’s unassuming.

I will actually want to have that clash. Reeky’s catalog is deep and can compete well. Include all the records you have created, co-written, ghostwritten and more, and we might have a different story to tell at the end of the clash. But that reply was bad. Like bad bad.” 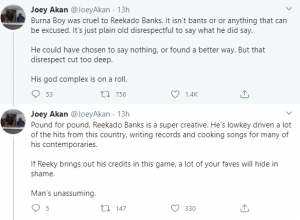