Nollywood actress, Moyo Lawal says having a lot of money doesn’t change how one handles money.

Speaking via her official Instagram page on Friday, she said how one spends small money is how one would spend big money.

Read Also: Moyo Lawal Reveals One Thing She Would Change About Herself If She Had To

She concluded by saying it is either one is sensible with money or not.

Determined by the amount of money in your bank account…… Until my mum passed away, I never realized she used to spend almost all her money on helping others🙄( Thank God, she was in the medical field and made a tangible amount of money) ….. ….. ……… P. S Nope, I am not half as giving as my mother 🙈……. But I try 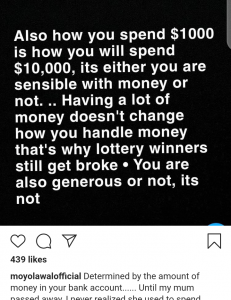