Nigerian singer Burna Boy has made it known that he does not care about what Nigerians think about him.

The singer made news yesterday after he took to social media to slam singer Reekado Banks, implying that the former MAVIN singer is not a good act.

This got many dragging Burna. The singer has now replied all his critics saying he does not care about what they think of him.

”If what Nigerian twitter said about me had any effect on me then I would be Dead by now. There’s even a Yoruba saying that translates “He who says the truth won’t even find a mat to sleep on”. well Ive proved that to be WRONG. You can take nothing from Me.” 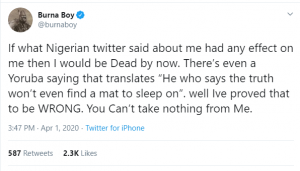