Nollywood actress, Tonto Dikeh says she gets discouraged by the human minds but one thing that has kept her giving is her heart.

Speaking via her official Instagram page, the controversial screen diva shared that she earlier did a post asking people to support her foundation but she was shocked to see just 96 comments.

Read Also: Tonto Dikeh Replies Those Asking Her For An Interview On Her Failed Marriage

However, she said as soon as she posted that she would be giving out help, comments on the ‘help post’ flew to 2,000 plus in split seconds. 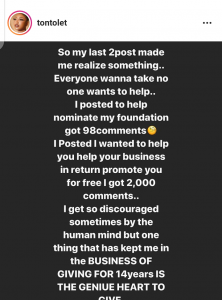