The Ondo State Government has arraigned four men suspected to have killed Mrs Funke Olakunrin, the daughter of the National Leader of Afenifere, Pa Reuben Fasoranti.

Recall that it was earlier reported that the Nigeria Police Force handed over the suspects to the State Government.

They are Lawal Mazaje from the Felele area of Kogi State, Adamu Adamu from Jada area of Adamawa State, Mohammed Usman from Illela area of Sokoto State, and Auwal Abubakar from Shinkafi area of Zamfara State.

The suspects were arraigned on Friday by the government at a Chief Magistrate Court sitting in Akure. 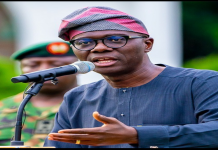