A Nigerian man has succeeded in getting a salvage response from popular American Rapper, songwriter, television personality, and actress, Belcalis Marlenis Almánzar, known professionally as Cardi B.

It all started after the man took to his Twitter handle to share a photo of supposed lookalike of the singer, to ask the singer if she is the one in the picture.

Reacting swiftly via the micro-blogging platform, the singer said no, the person is her cousin named, Ahmed.

Read Also: Cardi B Shows Off Her New Massive Back Tattoo (VIDEO)

Well, Ahmed is believed to be a Muslim name mainly for the males. 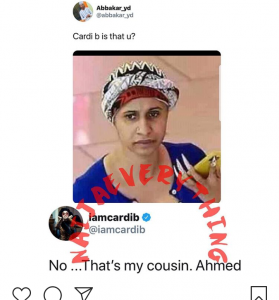