Multi-award winning Nigerian singer, David Adeleke simply known and addressed as Davido is no doubt a man of the moment.

Following the news that he has acquired a new mansion in Banana Island in Lagos state, he has taken to his social media page to throw a major joke about how he made the money for the new mansion.

According to the singer, he moved to Banana Island with the ‘money he made from singing about banana falling.’

“Moved to Banana with money I made from singing about bananas falling someone….cruise.” 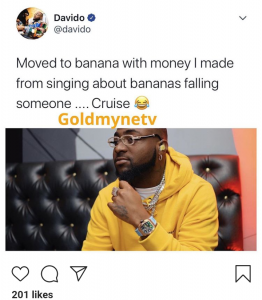