Peter Okoye of the defunct Psquare musical group has dished out a piece of advise to his teeming fans on social media.

The singer told fans that they should never depend too much on anybody in this world.

He stressed that even shadow leaves in that dark.

He wrote: “Don’t depend too much on anyone in this world. Even your shadow leaves you when you’re in darkness.” 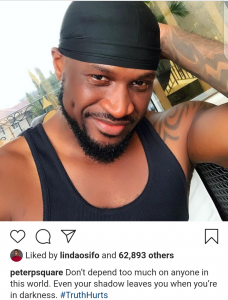