Legendary actor, Emeka Ike didn’t take it easy with a troll who commented on his page that his ex-wife suits him better than the new one.

It all started after the popular actor shares a short clip of himself, son and South  African wife, Yolanda Pfeiffer on Instagram.

One of his followers then took to his comment section to say his ex-wife, Suzanne Emma “fits him” more than his new wife, Yolanda.

Emeka who fired back at some of his followers over their comments, also alleged that his ex-wife is using a fake account to troll him.

The exchange was captured in screenshots below; 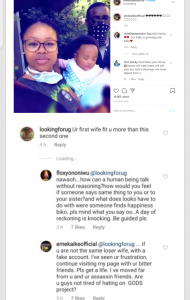