Industry giant Toni Payne has recounted how AY Comedian begged Olamide to perform at his show a year after he rejected a request to allow the rapper perform at one of his shows.

Payne, who was Olamide’s manager at the time, took to her IG stories to share the story saying, AY refused OIamide to perform because as at that time, the rapper was still an upcoming artiste.

“I was speaking to a friend today and it reminded me of the story when I was managing Olamide. I stopped speaking to comedian AY because of this incident and honestly till today, I’m glad I did cos I don’t like people with that kind of character. So me and AY use to be cool. I’ve done favours for him in the past, no big deal.

“When Olamide was coming up, I decided to ask cash in favour and asked if Olamide could perform at his show even if it’s for a minute. Omo see ela. The man refused to give the boy a chance. It pained me ehn, I took the L and lamented for weeks. Lmas. No wahala, we sha kept on pushing. Anyway, fast forward to the next year, Olamide had started doing well, and guess who conveniently needed a favour and wanted Olamide to perform? Oga comedian.

“This is the same guy that turned Olamide down because he wasn’t big enough now looking for “friend of the hour” performance. See ehn, it’s okay to turn him down, Nothing is by force but don’t come back later looking for favour from that same person you underrated. It makes you look like a user IMO

“She looks like Olamide” – fans tell Maria Okan as she shares first full photos of her baby, Monife

“I told Cabasa he just pay, but Cabasa as per man of God, said just to free and I respected that. Lef to me, I would have charged hm that day and at double our rate. Glory be to God cos if man na God… See ehn, no on born of a woman can stop anything God has planned for you. I’m always f*cking proud when I see Olamide thriving cos the road was f*cking hard. I knew his talent couldn’t be hidden for long cos all na time”. 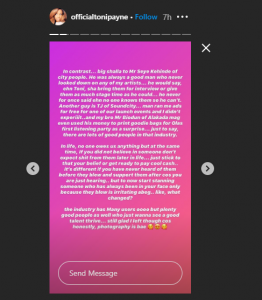