Popular music executive, Ubi Franklin has opened up that he often wakes up very confused about life.

Speaking via his official social media page while advising his fans not to let anyone pressure them with luxurious lifestyles on social media, he added that even some people who are perceived as big on social media also have who they run to when things are not going on well.

He concluded by saying not everything that happens to celebrities make it to social media except the good news. 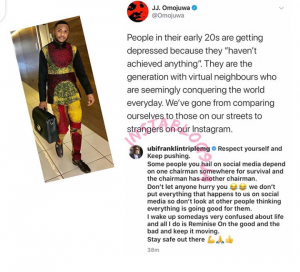