Using herself as an example, the mother of three stated that she could not leave her relationship despite all she was experiencing.

She added that this is so because she has lost herself in the marriage beguiled by religion and culture.

Read Also: We Should All Make Out Time To Goof Around With Our Kids – Victoria Inyama To Parents

She made this known via a post on her official social media page on Thursday, 28th May.

She wrote: “Leaving a Toxic marriage/ relationship is Hard; I personally couldn’t leave cause I had lost myself in the marriage beguiled by religion & culture Leaving is not automatic.” 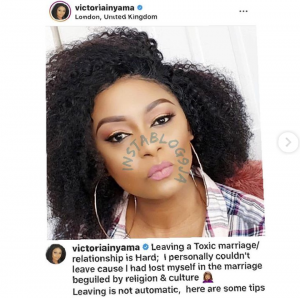