The actress and single mum of two whose first marriage ended on a sour note, captioned the photos “Love wins here”

Earlier this week when news of her engagement to Senator Dino Melaye broke, Iyabo Ojo did not dispel the reports but was probably concerned about the condescending way it was reported.

Read Also: ‘I Was Scared And Nervous, ’ Says Iyabo Ojo’s Daughter Priscilla As She Pranks Her Ex-Boyfriend

Dino on his own part debunked the report and also promised to release a song for bloggers. 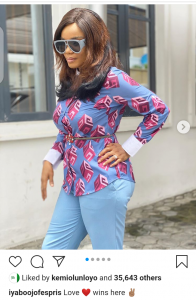