Nigerian afro-pop singer, Tiwa Savage has opened up about her challenge as a top music star following her latest feature on the cover of Billboard magazine.

Speaking via her official Instagram page on Thursday, she stated that a lot of people in Africa still have the idea that a woman has to be submissive, which is not a bad thing, but that the modern black woman is being limited.

“A lot of people in Africa still have the idea that a woman has to be submissive, stay at home and be the wife and mother.

“Don’t get me wrong. Those are great morals to keep. But I think the modern African woman, the modern black woman is being limited. We can do both. You can have a successful full-time job, you can be strong and vulnerable at the same time.

“That’s the message I’m trying to put across. So when you see my videos or see me on the red carpet, don’t think I’m not at home cooking for my son or helping him with homework when I’m not doing shows.” 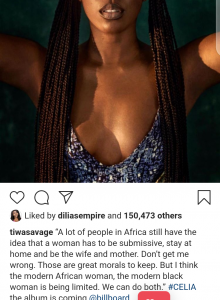