A fan has taken to social media to recount how he was embarrassed at Davido’s house with rapper Zlatan Ibile calling for him to be beaten.

“On my way driving back home cos I live very close to Davido house in Lekki (Admiralty Way). Making my turn around the streets I noticed a lot of celebrities hanging and chilling alongside Davido on his Balcony so I decided to make a u-turn to capture a moment being a huge fan of Davido and 30 BG at large.

“So I parked and rolled down the glass halfway. Just before we could do anything, one of the security guards moved closer and hit my brother in the face. I felt so disappointed and nothing made me feel so bad than hearing Zlatan screaming at the top of his voice from the balcony saying “are you guys crazy. Seize their phones, slap them”.’ 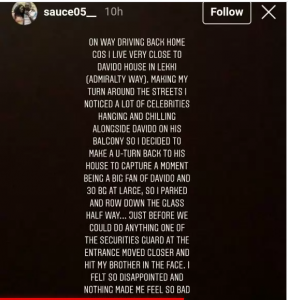 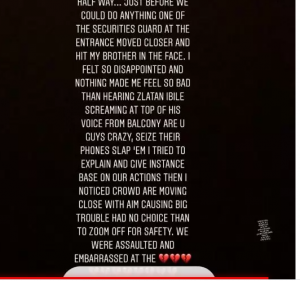