On Thursday’s episode of the Big Brother Naija Pepper Dem Reunion show, housemates spoke about the failed relationships in the House.

The ex-participants also addressed the love triangle which involved Tuoyo, Diane and Nelson while in the House.

Sir Dee said that he had a conversation with Tuoyo and Nelson so they knew it was an open playing field and they were shooting their shot with Diane.

Diane said she liked Nelson but she noticed his friendship with Esther so she took a step back.

The chef also said she liked Tuoyo but she knew he had a girlfriend.

However, she said she and Sir Dee are more like siblings and they understood each other in the house.

During the show, Tuoyo dropped a bombshell, saying that he likes Diane’s personality but physically she is not my spec.

Nelson, on his part, said he knew Diane liked Tuoyo but she liked him more so he tried to reciprocate the emotion.

The model also claimed he and Esther were just friends.

Reacting to this, Esther blasted Nelson, calling him a lying scum as she claimed that he had asked her out on two occasions and they were pretty close but she is surprised that he said they were just friends.

The Housemates said that they felt Nelson and Esther were going to be a couple.

Nelson further explained that he was surprised at how quickly Esther replaced him with Frodd after he left the House.

The model added that Esther had told him some negative things about Frodd but immediately he left the house, they both shared the same bed.

At the end, Nelson and Esther decided to let bygones be bygones by sharing a hug.

I Like Diane's personality, but she's not my spec when it comes to PHYSICAL APPEARANCE. – Tuoyo. #BBNaijaReunion pic.twitter.com/2hn4otcq8g

It Looked like I was close to Esther, but I liked Diane more. – Nelson.#BBNaijaReunion pic.twitter.com/UlcSYf013a 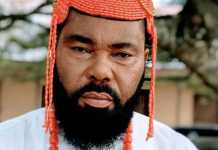