Mai Mala Buni, Yobe state governor who has been appointed as the caretaker Committee of All Progressives Congress, APC, says the purported Tinubu/Dogara ticket for the Presidency in 2023 is not the Party’s priority at the moment.

Speaking during an interview with BBC Hausa Service interview monitored in Kaduna, on Thursday, he said it is impossible to prevent people from talking especially during a democratic dispensation.

He said, “You know you can’t stop people from talking. In fact, rumour strives in a democracy. That is not even our concern for now. Our concern is to further unite the party,” he said. 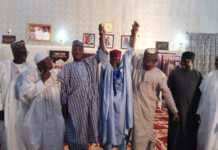