Frodd didn’t hesitate to put his fellow former housemate in his place and he also let the latter know that he doesn’t appreciate the comparison.

The exchange started after Omashola put out a tweet which reads;

“Lucy and Frodd who cry pass?” 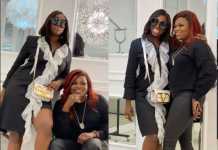