Former Big Brother Naija ‘Lockdown’ housemate, Vee has revealed that she has been blocked by her fellow ex-housemate, TolaniBaj on Instagram.

The singer made this known during an interview with media personality, ChueyChu for Olorisupergal on Friday.

Vee stated that she has no beef with anyone and she intends to civil with everyone.

However, she said that she apologizes to those hurt by her words but she has said what she said so they need to move on and starting making money.

When asked if she plans on resolving her beef with TolaniBaj, she said;

“I don’t have beef with Tolanibaj, beef is when it’s two-sided, I didn’t block anybody, I did not follow anybody.

The reality TV star was asked if TolaniBaj blocked her, and she gave an affirmative reply.

“Yes, I am blocked, but I am not beefing anyone, I intend on being civil with her. But one thing I don’t do is force things.” 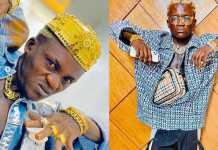