Former Minister of Aviation, Femi Fani-Kayode has warned the Federal Government to abort any plan to deploy soldiers against the #EndSARS protesters across the country.

The former Minister took to his Twitter page to note that the decision to deploy soldiers will bring an end to Nigeria.

Nigerians keep protesting against the brutality of the police force despite the disbandment of the Special Anti-Robbery Squad, SARS.

The former Minister in his statement noted that if the youths are killed the same way members of the Indigenous People of Biafra, IPOB, and Islamic Movement in Nigeria, IMN, were killed, Nigeria will break-up. 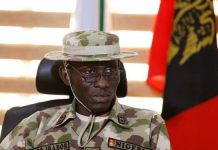 Irabor: Nigerians Cannot Live In Fear — It Will Soon Be A Thing Of The Past