Ezenwo Nyesom Wike CON (born 13 March 1963), also known variously as Ezebunwo Nyesom Wike or Nyesom Wike who is a Nigerian politician and lawyer was forced to join the EndSARS protesters in Rivers state today October 13 after they all marched to the state government house and asked him to come out and address them. 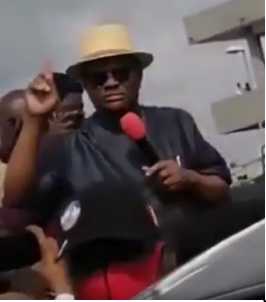 Recall that on Monday, October 12, the governor banned residents of the state from staging any #EndSARS protest.

On Tuesday morning, the residents trooped out in their numbers, defied his order, and staged a protest. Governor Wike was forced to come out to speak with them.

Watch a video of him talking to the protesters below: