Borno State Governor, Professor Bababgana Zulum on Tuesday asked police authority to send officers attached to the defunct Special Anti-Robbery Squad to the state to participate in the fight against Boko Haram insurgents. 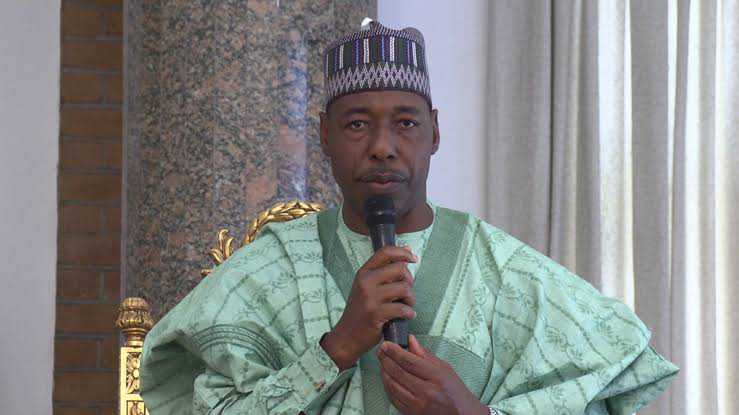 The police unit was dissolved and its personnel redistributed to other formations following nationwide protests (#endSARS) against high-handedness.

Barely two days after the deletion of the police squad, another mass protest in support of its activities took place on Tuesday nationwide.

Zulum made the call when a delegation led by the Minister of Interior, Ogbeni Rauf Argebesola met him at Government House, Maiduguri.

Zulum said officers attached to the defunct unit had played a role in counterinsurgency operations by using their energy and aggression against Boko Haram terrorists.

He said, “We are not in support of brutality by any security outfit, but to be sincere, here in Borno State the efforts of SARS operatives in the counter insurgency operations need not to be overemphasized.

“They are doing a wonderful job in containing the security situation in Borno State. They have greatly supplemented the efforts of the Nigerian Military.” Zulum said.

In the meantime, a network of interest groups have staged a peaceful protest within Maiduguri to express concern on the security situation in the North East Region with a view to drawing the attention of the relevant stakeholders to provide a lasting solution especially Borno State. The protesters made a case for SARS in handling insecurity situations.

The protesters included organised labor, student unions, traders and women groups among others.

Speaking for the groups, former Chairman, Nigerian Bar Association Borno State Branch, Barr. Mohammed Maigana said “the reasons why we gathered here under the banner of CSOs, is to come to the Government House and present our letter to the governor take to President Buhari in which we appreciate the efforts and work of SARS here in Borno in particular; we have seen the way and manner they fought Boko Haram, go to all the local governments areas where the governor has already resettled the people, certainly you will see SARS there.

“Therefore we want the president to return back SARS or if possible those in 35 states should be posted here and fight the insurgency. I can assure you within one month Boko Haram will end because of what we have seen their commanders doing.”

Chairman of CSOs, Ambassador Ahmed Shehu noted that CSOs and Borno citizens were ‘touched’ by the sudden disbandment of the squad considering its effort in complementing military in the fight against insurgency.

“The positive role played by SARS in Borno state in particular and the northeast in curtailing insurgency and protecting the life and property of the citizenry is commendable and need to be appreciated, SARS in this part of the country were majorly engaged in life saving operations and actively participating in supporting the military in counter insurgency operations.

“The peculiarities of Borno State and the role played by SARS need to be considered hence we are demand for urgent establishment of special unit that will protect the citizenry in Borno State.

“Borno citizens have good experiences with SARS hence we are requesting the president to deploy all the SARS formation across the country to Borno State to assist in the fight against insurgency.”

He said government would continue to improve the well-being of the people and ensure the total return of peace, and appealed for people to be prayerful.