A man believed to be a mobile police officer has participated in the protest calling for the Special Anti-Robbery Squad (SARS) unit to be disbanded.

A video that surfaced online showed the man dressed in a vest belonging to the Nigeria Police Force (NPF) and marching along with protesters while calling for the SARS unit to be scrapped, The Cable reported. 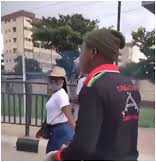 He said he once paid an undisclosed amount of money to secure the release of his brother who was arrested by SARS officials.

“They arrested my brother… me wey I be officer, do you know how much I paid? God punish them.”