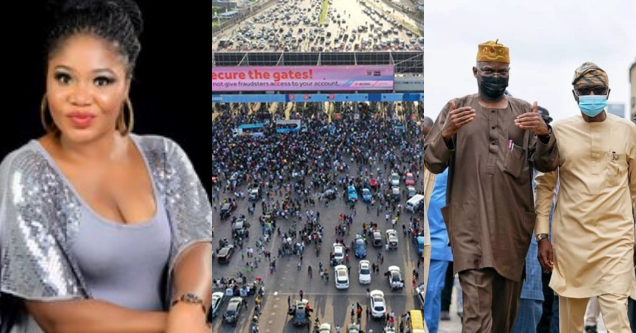 Following reports by the government that 3,000 used condoms were found on protest ground at Lekki toll gate, a Nigerian woman has taken to Twitter to ask few questions.

The Twitter user, Bukola Flora questioned the veracity of the report, querying who took time to count the condoms.

Reacting to her tweets, some Twitter user further assert that youths at the Lekki-Toll Gate swept it daily during the protest.

3,000 used condom found at Lekki toll gate.
The question is.. “Who counted the condoms”?

I thought youths swept the Lekki toll daily. . So where did they see condoms to count. Unfortunate elders

Recall that the Lekki-Toll Gate had been cleared and cleaned by several agencies including the popular LAWMA, crest with the responsibility of keeping Lagos clean.

Other independent bodies also volunteer to ensure the Toll Gate was cleared of all debris.