Anambra 2021: I Will Build 21 Universities If Elected Governor – Godwin MadukaA United States of America-based medical doctor aspiring to be governor of Anambra State next year, Dr Godwin Maduka, at the weekend, said that he plans to build 21 universities in the state if given the opportunity to serve. 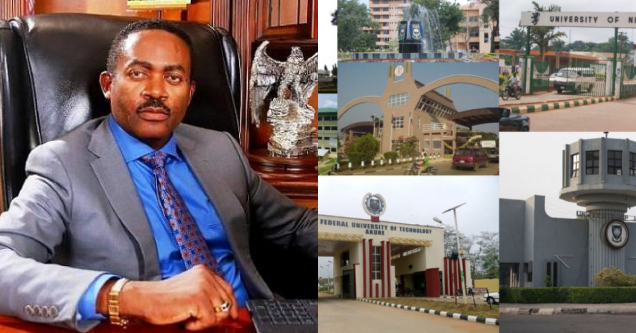 Maduka, who is aspiring for the top job on the platform of the Peoples Democratic Party (PDP), said that if elected governor, he was going to establish higher institutions of learning so that Ndi Anambra could have greater access to university education.

The governorship hopeful stated this in his Umuchukwu country home in Orumba South LGA during a program he organized for the youths of the state.

“If given the opportunity, I will build one university each in all the 21 Local Government Areas of the state. Education is key all over the world. We shouldn’t have a few scattered universities here. It is not that hard to set it up.

“In other places of the earth, some towns have up to six universities. It should be as easy as ABC. We will start with only 21; one per local government.

Asked how was going to fund them if that were to be, he queried:

“Do you ever know what comes to the governor’s house in terms of funding? Any frugal governor can take care of that. There are some things that we can let go.

“And there are some things that we can bring in. It is a matter of priorities. There should be a new negotiation about funding education. After all, that’s why I am here now.”