A schoolboy was murdered in Oyo state one day to his 14th birthday and his boss has been arrested for his murder. 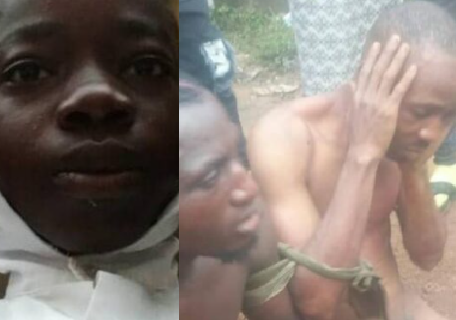 21-year-old bricklayer, Biodun Owolabi was arrested alongside his accomplices Festus Simon, 20, and an Alfa, over the killing of Quadri Olalekan, a 13-year-old secondary school student, for money ritual in Ibadan, Oyo State.

On Saturday, October 31, 2020, the suspects allegedly tricked the deceased with a bricklaying work at Iyana Church, Iwo Road, Ibadan.

Quadri Olalekan, who has been an apprentice due to the closure of schools, presented himself for the job as his boss requested.

When he didn’t return home after several hours, his mother raised an alarm and a search began.

“When it was discovered that the boy was missing, Owolabi was approached but he said he did not know where the boy was. When members of the community intervened, he said the boy had been killed and buried. He said he and the Alfa killed the boy and took parts of his body for ritual purposes. According to him, a popular baker and another individual in the area paid them to bring the body parts,” a source told the publication.

Owolabi then took members of the community to the place where Olalekan was buried. His remains were stuffed in a sack before being buried in a shallow grave.

Parts of the teenager’s body were missing. His arms, eyes, penis, and part of his buttock were reportedly removed. The sack was dripping with blood when it was exhumed.

A relative of the deceased’s mother who simply identified herself Bisi said Quadri Olalekan was to mark his 14th birthday a day after he was killed and his mother had already bought clothes for the occasion.