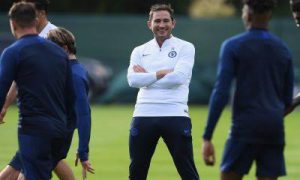 Chelsea coach, Frank Lampard has made a new change in his first team at Stamford Bridge.

The new change saw Jorginho been removed as the Blues’s No.1 penalty taker with Timo Werner serving as a replacement.

This latest decision comes after Werner converted two spot-kicks on Wednesday, as the Blues beat Rennes 3-0 in the Champions League.

See also; Ian Wright Claims Man Utd Could Still Win The EPL Title If They Had This Arsenal Coach

After the match, Lampard was asked about why Werner was on penalty duty despite Jorginho also being on the pitch.

“I spoke to Jorginho first because he’s been brilliant at taking penalties,” Lampard said in a post match update.

“It’s more missing a couple recently that I felt it was time to change. Jorgi’s answer was as professional as I’d expect. He only wants to score them but he was fine with that.

“If Timo takes them as well as today he’ll be happy. I’m happy he scored. Timo is as it stands now but of course he needs to keep scoring them. Today he did it very well.”