Controversial Nigerian rapper, Naira Marley put out a disclaimer as he reacted to a photo currently making the rounds on social media.

The viral photo shows a man, who shares a striking resemblance with the rapper, posing with an unclad lady on a bed.

Some web users, who have reacted to the photo, claimed that the man is the controversial rapper.

The singer has since taken to his Instagram page to refute the claims as he noted that he is not the one in the photo. 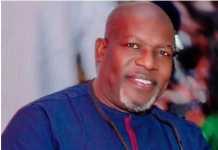