Who is Joe Biden?

Biden’s victory came after more than three days of uncertainty as election officials sorted through a surge of mail-in votes that delayed the processing of some ballots. Biden, 77, crossed 270 Electoral College votes with a win in Pennsylvania.

The result makes Trump the first one-term president since 1992 while Biden will be the oldest president ever to serve.

Our evergreen media platform, keen on informing our esteem audience on vital information, have thought it wise to bring to you some of the things you didn’t know about former US Vice-President, Joe Biden.

Joe Biden, born on November 20, 1942, in the city of Scranton in northeast Pennsylvania, moved to Delaware at age 10.

As a youngster, Biden had a promising future as he was very much interested in US politics.

Although, he briefly worked as an attorney before delving into the field.

In 1968, Biden bagged a law degree from Syracuse University College of Law, grabbing the 76th position in his class of 85.

Shortly after he won his first Senate race, tragedy struck as he lost his first wife, Neila Hunts and infant daughter, Naomi Christina in a car accident.

Biden’s sons, Beau and Hunter respectively suffered a broken leg and a minor skull fracture, but doctors predicted they would recover fully.

In 1975, he met his second wife, Jill Tracy Jacobs on a blind date and they got married two years later. The couple welcomed their daughter, Ashley Blazer in 1981.

He ran for president in 1988 but he dropped out of the race, saying that his candidacy had been overrun by “the exaggerated shadow” of his past mistakes.

This came after he admitted to plagiarising a speech by the then leader of the British Labour Party, Neil Kinnock.

And, as chair of the Senate Judiciary Committee in 1991, he oversaw Clarence Thomas’s Supreme Court confirmation hearings and he was criticized for his handling of Anita Hill’s testimony.

Hill had brought allegations of sexual harassment against Thomas and Biden failed to call additional witnesses, who could have backed up her claims.

Although, his 2008 presidential campaign never gained momentum, Democratic nominee, Barack Obama selected him as his running mate, and Biden went on to serve two terms as the 47th vice president of the United States.

Obama referred to him as the “best vice-president America has ever had”.

The eight years he spent working in the White House along with Obama permitted him to stake claim to much of his legacy, including passage of the Affordable Care Act, as well as the stimulus package and reforms enacted in response to the financial crisis.

The passage of the Affordable Care Act, and health care remains dear to him because it is an important topic which he often discusses in the context of his family’s personal issues.

One of his signature policy goals, Health care, he said in an early television ad, is “personal” to him.

In 2017, at the close of his administration, Obama presented Biden with the Presidential Medal of Freedom.

Two years later, the 77 years old began his campaign for U.S. president and is the 2020 Democratic presidential nominee. 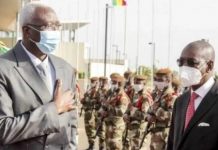