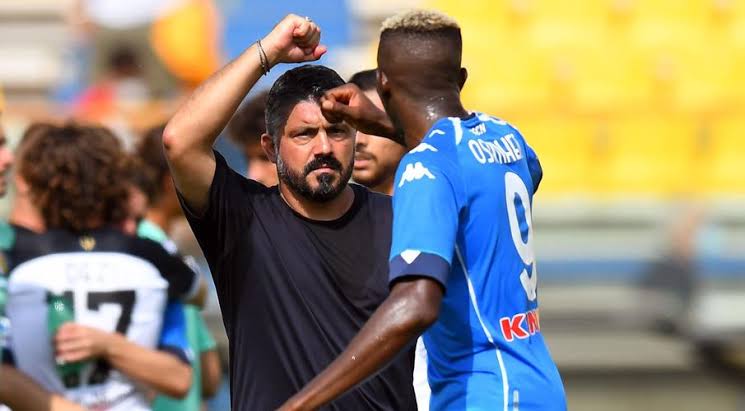 Napoli coach, Gennaro Gattuso in a recent statement spoke about the performance of Nigeria forward, Victor Osimhen as he urged his midfielders to improve on their ball delivery.

Gattuso in his statement applauded his players performance after the 0-3 home loss to Sassuolo on Sunday but believe they can do better.

According to the Naples coach, he believes Osimhen didn’t get enough deliveries to score goals.

The Super Eagles Forward has so far netted one goal and an assist from five games in the Serie A. Gattuso believes that the striker can score if his teammates give him better Service.

‘We didn’t convert our chances, we could’ve done more, there’s no point talking about a penalty,” Football Italia quoted Gattuso to have told Sky Sports Italia.

See also: Pogba Admits He Made A ‘Stupid Mistake’ With Arsenal Penalty

“If you don’t press Sassuolo well, then Boga and Traore can cause real problems. Our tempo was too slow when Sassuolo had the ball. We have to keep working, keep improving, finding a way to give Osimhen better service.”

Gattuso added: “We had many chances, we didn’t convert them, we could’ve done more and there’s no point standing here talking about whether it was a penalty or not. That’s the way they saw it, we have to focus on the game.

“These incidents can happen, it’s not my job to judge the referee. I judge the team and I say we could’ve done better. Sassuolo are a side that make you run hard and we were too frenetic. We were naïve on their penalty, we should focus first on being solid and getting the goal later.”

Why Napoli Players Must Give Osimhen Better Service