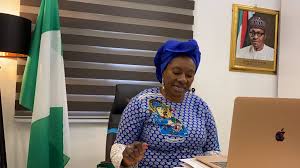 The Minister of Women Affairs, Pauline Tallen has been tested positive for the novel coronavirus (COVID-19).

According to reports, the Minister tested positive after a routine test conducted on her and members of the family.

According to a statement she personally signed on Saturday, the minister stated that she was asymptomatic but was advised to go for the test which returned positive.

In the released statement, the Minister, however, stated that members of her family who took the test were negative.

The minister has reportedly gone into isolation and is receiving treatment.