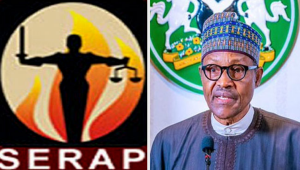 Socio-Economic Rights and Accountability Project (SERAP) has called on President Muhammadu Buhari and Minister of State for Petroleum Resources, Timipre Sylva, to probe how the Federal Ministry of Petroleum Resources spent N116 million to buy stationery items in 2015.

SERAP made this request in a statement signed by its deputy director, Kolawole Oluwadare on Sunday, December 13, 2020.

This is coming following the revelation by the Office of the Auditor-General for the Federation before the Senate Public Accounts Committee that the Federal Ministry of Petroleum Resources spent N116 million to buy pens, letterheads, and toners in one year.

The group also urged the president and the minister to investigate the amount spent on the same items between 2016 and 2020.

The organisation advised the president to “refer the matter to appropriate anti-corruption agencies for prosecution” if there is evidence of misuse of public funds in the ministry.