Home Entertainment “Stop Explaining Yourself To People Who Will Do Worse If Roles Were...
Facebook
Twitter
WhatsApp

Media personality, Toke Makinwa has advised her social media followers against explaining themselves to people who will do worse if the roles were reversed.

Taking to Twitter on Thursday, the media personality recalled an encounter she had with a troll, who labelled her as a ‘hoe’.

“Someone called me a hoe the other day, probably thought I’ll be mad, I didn’t even argue, I accept cos everybody a hoe, no one is calling you out cos you ain’t popping or your shit ain’t selling. Stop explaining yourself to people who’ll do worse if the roles were reversed.”
See the tweet below: 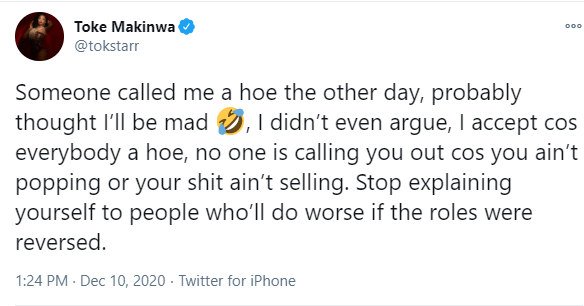