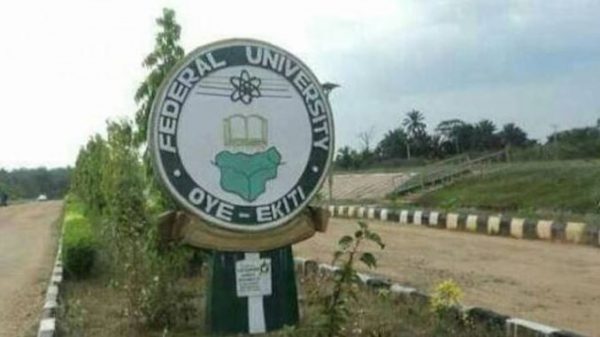 The Governing Council of the Federal University, Oye-Ekiti, has suspended the Registrar, Olatunbosun Odusanya, for alleged misconduct.

This is contained in a statement issued in Ado-Ekiti by the Special Adviser on Media Matters to the Vice-Chancellor, Wole Balogun.

Mr Balogun said Mr Odusanya was suspended by the University Governing Council, chaired by Mohammed Yahuza, to allow proper investigation into allegations of misconduct levelled against him over irregularities in recent appointments.

The council said Mr Odusanya’s suspension was conveyed to him in a letter dated April, 20, 2021 and signed by the Vice-Chancellor, Abayomi Fasina.

The letter, the council said, also copied all appropriate quarters of the University community.

The letter of suspension, which was entitled “Suspension From the University”, reads in part: “you would please note that consequent upon the consideration of the report of the Committee on the review of appointments made in the University from Aug. 1, 2020, to February, 2021 by council.

“You were recently queried via our memo Ref. No: FUOYE/VC/CD/007 dated 6th April, 2021, for act of misconduct in the appointments.

“The Staff Disciplinary Committee which was constituted by the governing council has considered your written representation and found it unacceptable to exculpate you from the act of misconduct.

”In line with the Regulations Governing the Conditions of Service of Senior Staff on CONTIS 06 and the above in the University , the Pro-Chancellor and Chairman of Council, on behalf of Council, has directed that your appointment be suspended from the University with half salary, with immediate effect, pending the determination of the case against you.