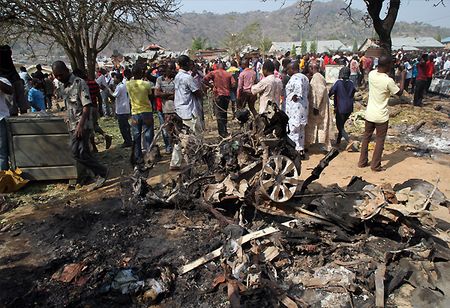 Why are Fulani herdsmen carrying AK-47 rifles, why are the Igbos fighting for a Biafran nation, why are militants blowing up pipelines, why are students been kidnapped on daily basis? These questions can be answered in one sentence: Insensitivity of the Nigerian government.

Nigeria, under the Muhammadu Buhari-led administration, does not value human life and safety. This is evident in the manner and approach in which the government treats its citizens when it comes to securing lives and property. It appears the government is fast losing its power and relevance to terrorists. The Nigerian government must, as a matter of urgency, strategize on how to tackle the rising insecurity in the country, to change the status quo.

Today, there are pockets of violence and attacks nearly in all 36 states, including the federal capital territory (FCT). These attacks range from kidnapping, armed robbery, ritual killings, smuggling, cultism, violence, herdsmen killings, Islamist terrorism and militancy, ethnic wars, among others. All these boil down to the feeling of insecurity against a fellow Nigerian.

Owing to the government’s insensitivity to security challenges confronting the country, Abuja residents can no longer comfortably travel to Kaduna via the Abuja-Kaduna expressway. The Benin-Sagamu and Akure-Ilesa are a den of bandits in spite of heavy security operatives on these routes. Bandits continue to kidnap school children by the day. Politicians, Clerics, monarchs are not spared from the kidnappings.

Gunmen suspected to be kidnappers abducted some students during an attack on Green Field University in Kaduna state. Weeks ago, David Oyewumi, the traditional ruler of Ilemeso in Oye Local Government Area of Ekiti State was Thursday kidnapped by unknown gunmen who attacked the monarch’s palace. In March, no fewer than eight members of the Redeemed Christian Church of God (RCCG) in Kaduna, were abducted by gunmen while travelling for a programme. Recently, four students of Capro Secondary Mission School located at Gana Ropp in Barkin Ladi Local Government Area of Plateau State were abducted by gunmen. A few days back, an attack by herdsmen on an Internally Displaced Persons camp in Benue State left seven persons dead and many others injured. These and many more disheartening news are what Nigerians wake up to every day.

It is against this background that Information Nigeria submits that if citizens, regardless of their religion and tribe, feel a sense of belonging in the governance of the country, insecurity will cease to exist.

We call on President Buhari to believe in and follow the practices of nationalists who fought for Nigeria’s independence. Ahmadu Bello said, “The things that unite us are stronger than the things that divide us. Differences in religion need not bar people from walking together for the good of all.”

Nnamdi Azikwe said, “My point is that our ancestors, in spite of their heterogeneous languages and cultures bequeath to us the legacy of political, social, economic, legal, philosophical and religious ideologies which have sustained and enabled them to survive.
“Now that we are confronted with problems of co-existence and are re-ensconced in a wilderness of alien ideologies which are making a terrific impact on our ways of life, the obvious solution is for us, like a seaman who had drifted from salt water and fresh water, to assuage our thirst. We must drink deep from our roots to discover this secret of successful co-existence.”

But then, in tackling the current security challenges, Nigeria must embrace state police. This will allow states and communities to build up their own security capacity to control crime. Also, security operatives must strategise on ways to stem the illegal flow of arms and ammunition into the country.