Nigerian movie producer, Adebayo Tijani has been accused of sleeping with actresses before assigning movie roles to them.

A social media user who uses the handle @Feyi1 on Instagram called on popular Instagram blogger, Gistlover, to investigate and drag Adebayo Tijani as she claims the latter goes into the pants of actresses before giving them jobs on her movie projects.

According to her, she was a victim in 2018 and he ended up infecting her with a sexually transmitted diseased (STD) after raping her.

Sharing her experience with Gistlover, @Feyi1 lamented that Adebayo Tijani has destroyed his life and she described him as smelling, dirty and shapeless.

@Feyi1 made this petition to Gistlovers after he shared he dragged Yoruba actor, Lege Miami for defending embattled actor, Baba Ijesha who was arrested for raping a 14-year-old girl.

As Lege Don drag all of Una come out now,let everyone face their music,Leg Miami rapist we are compiling the list for you,Rapist!!!I come in peace, Gistlover wrote.

“Gistlover, please drag that Oloriburuku Bayo Tijani too… He don almost sleep with half of Nigeria finish… all in the name of role. I was a victim in 2018…

He even gave me infection, the first night the thing happened was a rape (My friend that took me to the location can testify) we later saw each other like 2 times after that promising me he’d help my career, I had to run when I couldn’t get anything before he spoil my life… That man is so dirty, smelling and shapeless” 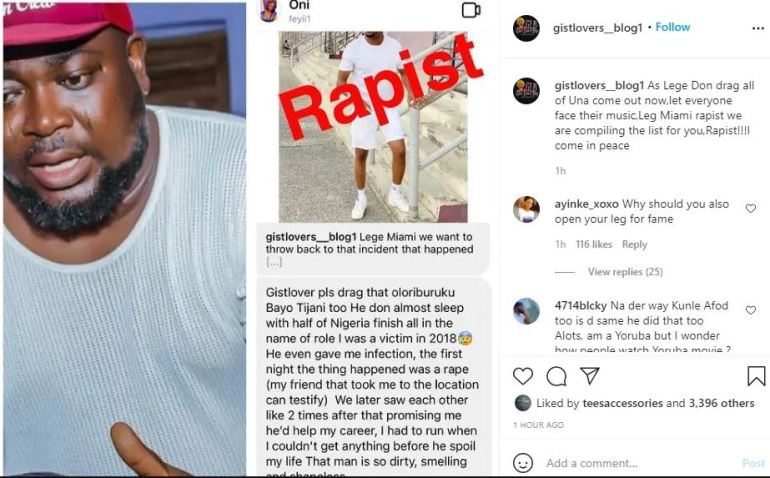