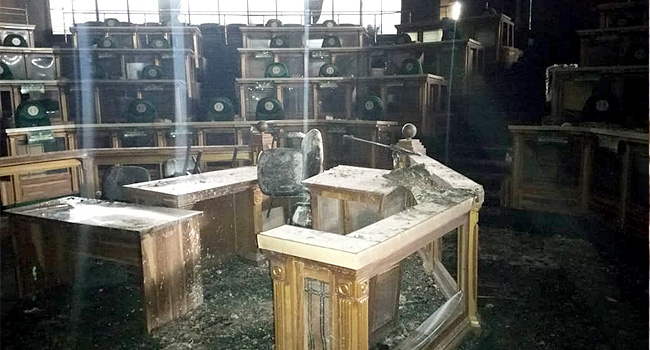 Fire has gutted by fire at the Katsina State House of Assembly Chamber.

The Chamber was recently renovated by the Katsina State Government.

The incident is coming barely 30 days after the same scenario occurred at the Katsina Central Market where items worth billions of naira were destroyed.

According to an eyewitness, the fire was put out by the joint firefighters and security agents stationed at the State House of Assembly, noting that no life was lost.

The  Deputy Chief Whip of the House and member representing Kankia constituency, Salisu Rimaye has said that no one can actually say the real cause of the incident.

He said the Assembly got to know about the incident when the clerk of the House instructed the Sergeant at arm to go and clean up the chamber.

He explained that the Sergeant at arm opened the chamber and discovered the incident.

He further stated that a team of electricians at the Assembly has started a process to a certain the real cause but, he attributed it to electrical appliances especially the air conditioner left on.

The fire started right behind the Speaker’s seat with the seat of the speaker completely burnt to ashes.

Other areas touched by the incident are the press and guest gallery as well as some seats of other members of the assembly.