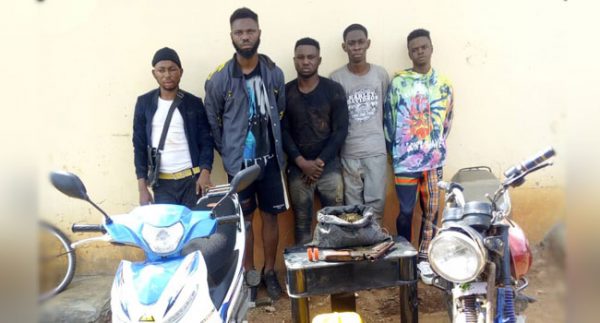 The Ekiti State Police Command has arrested five suspected cultists who claimed to be students of the Ekiti State University (EKSU).

In a statement on Sunday, the Police Public Relations Officer in the state, Sunday Abutu, noted that the arrest was made during an initiation ceremony held in a bush behind the school campus.

He explained that the Police Rapid Response Team acted on a tip-off and burst into the initiation venue to stall the exercise.

“The information was received by the Police Rapid Response Squad (RRS), Ekiti State Command, that some members of the Black Axe (Aiye) secret confraternity were holding an initiation rite inside a bush behind the Ekiti State University (EKSU) Campus, Iworoko-Ekiti,” the statement said.

“Upon the receipt of the information, a team of the RRS Operatives, in synergy with the police personnel attached to Iworoko Divisional Police Headquarters swung into action and stormed the bush where the suspected cultists shot sporadically on sighting the police,” the statement added.