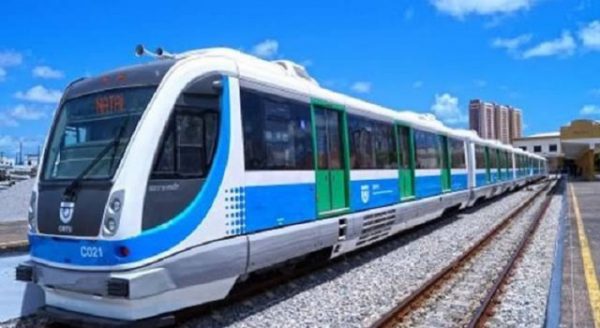 The Lagos state government has commenced the rail way transit project from Agbado to Marina.

This was made known by the Lagos state governor, Babajide Sanwo-olu, during the flag-off ceremony of a 37km rail route in Ikeja on Thursday.

The governor said the project would be implemented in two phases.

”We project that the Red Line would move its first passenger in the fourth quarter of 2022.

”In addition, we are simultaneously working on bringing the first phase of our Blue Line to passenger operation, projecting that it would be in operation by the fourth quarter of 2022,” he said.

”The remaining six would be constructed as independent stations at Iju, Ikeja, Oshodi, Mushin Yaba and Oyingbo.

”The phase two which would be mostly elevated would have stations at Iddo and Ebute-Ero before terminating at Marina.

“It will also help to reduce congestion, have predictable travel time and improve the GDP of the state.

”The implementation of the Red line project has become very elevated because of the financing package put in place for it by the state government through the Central Bank Nigeria (CBN) Differentiated Cash Reserve Requirement (DCRR) programme.

”This arrangement demonstrates the capacity of our Central Bank to support projects that are economically and socially viable.

”We are grateful to President Muhammadu Buhari and the Central Bank Governor, Dr Godwin Emefiele, for the invaluable assistance to the Government and people of Lagos State.

“We can only assure you that the funding package would be judiciously utilised,” he said.