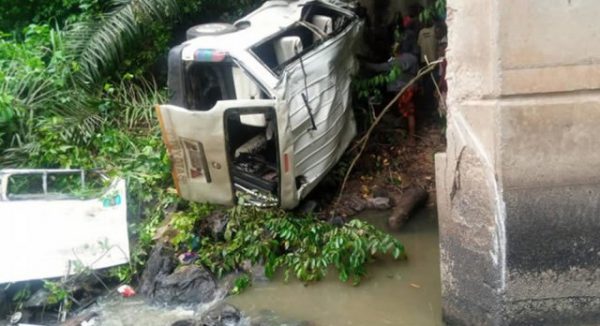 An 18 seater bus on Sunday plunged into the Owena River on the Akure Ondo road in Ondo State.

An eye witness account stated that the driver of the bus who was coming from the Ondo town axis and heading toward Akure lost control as a result of speeding and plunged into the river.

The witness further revealed that five of the passengers including a child were rescued and taken to the hospital by motorists and men of the Federal Road Safety Commission (FRSC).

The witness added that some of the passengers lost their lives at the scene of the accident.

Hassan, however, stated that the number of casualties had yet to be ascertained, adding that men of the command were still at the scene of the accident.

“Yes, there is an accident where a bus plunged into the Owena River and our men are still at the scene for rescue, but we cannot ascertain the number of people that died or survived for now,” he said.