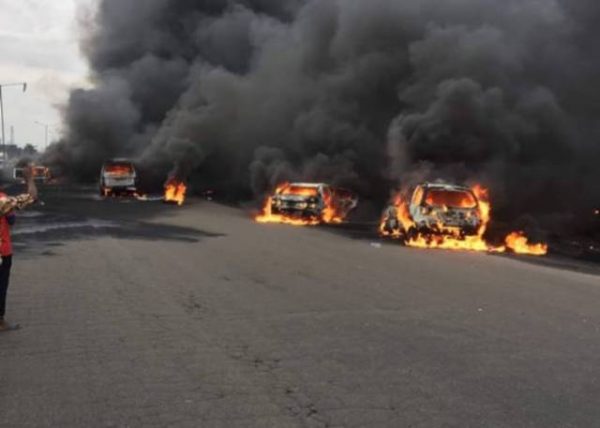 Fourteen passengers, including three children, have been burnt to death in an accident along Lagos-Ibadan expressway.

It was gathered that a silver Toyota RAV 4 with registration number, LND 13 GS; a silver Toyota Camry marked, GGE 369 GJ and a Mazda bus with unidentified number, were involved in the accident which occurred around 10:20pm on Thursday.

A commercial bus said to have wrongly overtaken a vehicle had reportedly hit a stationed faulty vehicle, Toyota Rav 4 parked in the middle of the road.

The bus was said to have lost control and somersaulted severally before bursting into flames.

“In all, 17 passengers were in the bus when the crash happened, with three seriously injured, and 14 burnt beyond recognition, among which are three kids,” he said.

He said TRACE operatives and other security agencies rushed two victims to the Lagos State Accident and Emergency Centre and one other to the General Hospital, Gbagada, Lagos.