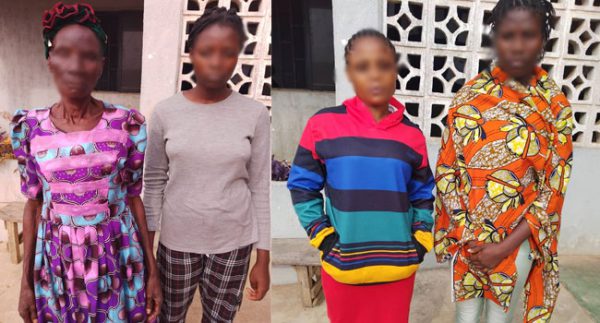 An 80-year-old woman and her 19-year-old granddaughter including two other ladies have been arrested by operatives of the National Drug Law Enforcement Agency, (NDLEA), for selling assorted illicit drugs like cocaine, heroin, methamphetamine, tramadol, swinol, and skuchies.

A statement by the NDLEA Spokesperson, Femi Babafemi, on Wednesday, revealed that the suspects were arrested following intelligence-based raids and follow-up operations on their locations.

He added that over 192kilogrammes of cocaine and other psychoactive substances were recovered from the suspects while the octogenarian, her granddaughter, and two other ladies; Tessy Matthew and Blessing Adesida were arrested.

The grandma Mary Adebayo, and her granddaughter, Funmilola Adebayo, were arrested at 6:30 am on Sunday at Ayeyemi Street, Akure south local government area.

During the early morning raid, the following were recovered from them: Skuchies- 149kg, cocaine -11grammes, methamphetamine-17grammes, heroin -3grammes, Cannabis Sativa- 4.914kg, swinol – 8grammes and tramadol -49grammes. Also recovered from them were two deep freezers and a TVS motorcycle.