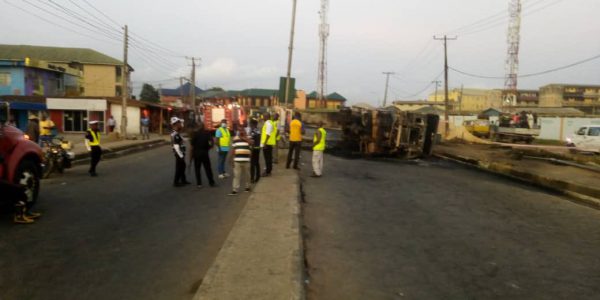 A tanker loaded with diesel went up in flames at Banire bus-stop, Egbeda in Lagos on Tuesday.

Confirming the incident, Femi Oke-Osanyintolu, the Director-General of the Lagos State Emergency Management Agency (LASEMA) said the incident was caused by a brake failure.

Contrary to the news making round the social media that properties were destroyed due to the explosion, the agency said there was no destruction of properties.

“On arrival at the above incident by first responders, it was observed that a fully loaded tanker with diesel had a brake failure and subsequently lost control, falling off the road which caused an explosion and fire outbreak,” the agency said.

“The fire has been successfully subdued by men of the LASEMA Fire service unit, LASG Fire service, NPF and other first responders while damping down is ongoing.

“There are no casualties and no property has been damaged by the blaze.”

Mr Oke-Osanyintolu said post-incident assessment will be carried out and the wreckage will be removed from the thoroughfare.

The official said the driver of the tanker and his motorboy have been arrested and handed over to the police.