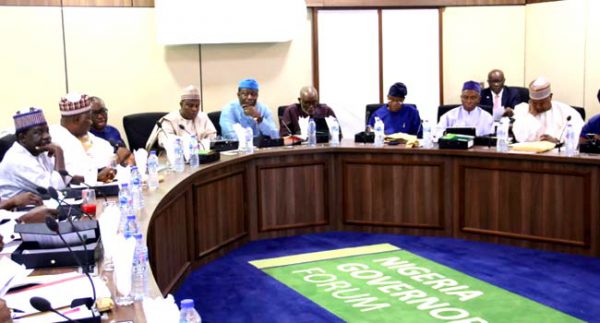 The Nigeria Governors’ Forum will meet on Wednesday to further discuss the implementation of the contentious Order 10 which grants financial autonomy to the judiciary and legislature in various states.

In a statement on Monday, the NGF Head of Media and Publicity, Abdulrazaque Bello-Barkindo, noted that the meeting would also consider updates on states fiscal transparency and accountability report, as well as concerns about the third wave of the COVID-19 pandemic.

He stated that the meeting would cover lessons for states and actions for governors on sustainability, as well as the adoption of SaaS E-procurement.

The NGF PTF Committee led by Governor Ifeanyi Okowa of Delta State, charged with the responsibility of liaising between the committee and the forum, would brief the meeting on health matters arising from the third wave of COVID-19.

There would also be presentations from the Minister of Agriculture and Rural Development, Sabo Nanono, on the second Phase of Farmers’ Enumeration, as well as the Director-General of Bureau for Public Enterprises, Alexander Okoh, on unlocking liquidity through sale/optimization of state-owned redundant/sub-optimal assets.

According to Bello-Barkindo, the Director-General of the NGF, Asishana Okauru, will give feedback on the series of Executive Order 10 meetings with the Minister of Labour and Employment, Chris Ngige, on the ongoing industrial action by the Judiciary Staff Union of Nigeria and the Parliamentary Staff Association of Nigeria.

The chairman of the forum and Ekiti State Governor, Kayode Fayemi, had stated that governors were willing to implement the Order 10.

He had also given the assurance that the implementation process would commence in the states by the end of May.