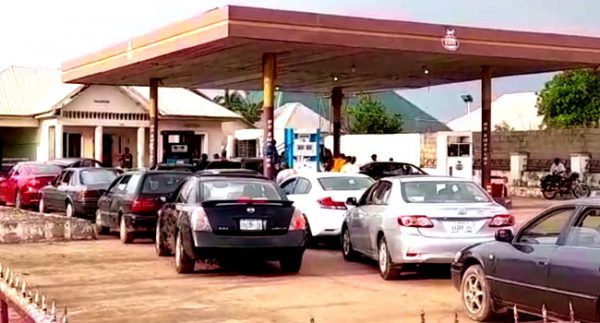 Long queues have surfaced at petrol stations in various parts of Kaduna State, especially in the metropolis and other surrounding towns.

Motorists besieged filling stations on Sunday in what can be described as panic buying of fuel ahead of the planned industrial action by the Nigeria Labour Congress (NLC) and its affiliate unions in the state.

While some motorists found it difficult to buy fuel into cars and jerrycans, many spent over four hours in queues at petrol stations without getting the product.

This led to a situation where some petrol stations and black marketers took advantage of motorists to exploit them, putting the petrol pump price at about N172 per litre.

This comes following the lingering dispute between the state government and labour union, the NLC had directed a total withdrawal of services to Kaduna by workers for five days in the first instance, from Sunday.

In compliance with the directive, the national leadership of the Nigeria Union of Petroleum and Natural Gas Workers (NUPENG) asked its members in the state to down tools from the set date.

The union accused the state government of taking anti-labour actions, noting its decision to embark on a mass sack of teachers and other civil servants in the state.

Although the state government has since refuted the claims by the labour union, it announced in April that it would down-size its public service.